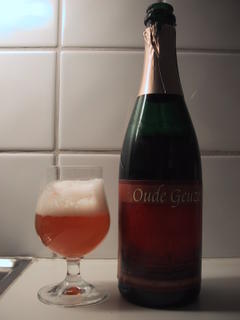 So the time had come for a celebration beer. Not that I could think of that much to celebrate, actually. Despite it being a shiny Saturday.

But this particular beer was made for celebration, marking the 50th anniversary of the Drie Fonteinen restaurant and geuze blender. Located in the the heart of Payottenland south-west of Brussels, known to quality beer lovers as Lambicland, in the village of Beersel, and on the web at www.3fonteinen.be Easy get to online as well as in the real world as Beersel is just a short train ride from the Brussels South Station.

Just called De Boeck by the friendly shop assistant of the excellent De Biertempel outlet in Brugge, which I found better organised and more spacious (and certainly less overcrowded by Japanese tourists) than their main outlet in Brussels. The nickname Boeck derived from the painting on the label ("Nightlights" by Felix de Boeck).The 75 cl champagne bottle, with the bottle date, 21 November 1998, handwritten on the back side, cost what is seen as a small fortune in the Belgian beer market, an amazing 10 Euro. What is more amazing to me is that a vintage champagne among beers cost the same (in Belgium, that is) as I had to pay at the Norwegian state liquor store today for one of their cheapest red wines. Maybe the undervaluation of world-class beers in Belgium is really what I should celebrate. And the fact that I am able to be there quite a few times every year to pick up my treats without asking for an extra credit line with my bank.

As a start, the bottle seemed to contain more than champagne-like pressure. Had I not stayed back when opening the cap, I would definitely have little to celebrate. Eventually the glass was filled with the hazy, deep golden orange-coloured beer. The head was initially huge, but quickly died down. The aroma is very acidic with notes of apples and vanilla. Initially, the flavour is sweetish, but gradually almondy bitterness takes over, ending on a rather dry note. Long aftertaste, good body and fizzy. A really special beer, proving the keeping qualities of an oude g(u)euze. If only the beer-drinker kept equally well, there would be plenty of grounds for a celebration!

Belgian Beer: Old Duvel versus Young Duvel: The Mellowing of a Devilish Beer 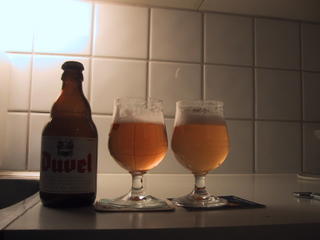 The beer shop Dorstvlegel in Antwerpen came across a crate of old Duvels, and I managed to secure one of these bottles with best before date 08-2006, so bottled three years before in August 2003. Today I popped into the Norwegian state liquor store that also sells Duvel, with a alcohol content of 8.5% by volume it cannot be sold in ordinary shops, picking up a bottle with best before date 04-2008.

So less than 20 months distinguish the two bottles, but the difference is noticeable already in the appearance. This is definitely not going to be a blind-tasting- you will have to lose more senses than just the vision to spot the difference.

The "old" Duvel's head was significantly less than the famous head associated with a fresh Duvel. Whereas the young Duvel is hazy straw-yellow, the old Duvel clearer and somewhat darker, maybe with a slight reddish hue. The picture above may be poor quality- is it cursed by some devilish forces, I wonder- but the "old" Duvel is the one closer to to the bottle.

The Duvel aroma is a famously mixing yeastiness with the spicy Saaz aroma. Yeastiness has developed into sun-dried fruits and the hop spiciness is gone 20 months on. The old Duvel has that aged aroma that I have come to know so well from many nights at the Antwerpen beer café Kulminator, the world's most famous aged beer bar.

The young Duvel is famously spritzy, the sweet maltiness is balanced by good bitterness, and the finishing mouthfeel is dry. The old Duvel is softer and seemingly less bitter. After enjoying the nutty and raisiny flavours the finish is still dry, though.

Duvel is not an obvious choice for aging, since so much of its character derives from its spritziness and noble hop aroma, that will no longer be prominent in an aged bottle. This tasting convinced me that even what the Flemish call "hoogblonde" (high blond) beers can develop interestingly with time. So enjoy your blonds now if you like- but they don't become less complex with age. 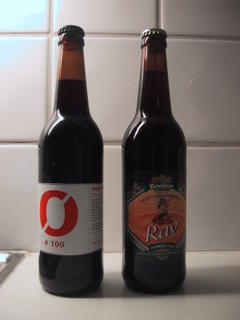 It had been a week since I returned from my ten days vacation in Beer Heaven, for others best know as the Kingdom of Belgium. As usual, I had brought back a small share of the goodies for Norwegian weekend nights ahead this autumn.

Still, maybe because I felt lucky to secure a bottle of the one-off brew #100 from Nøgne Ø, I wanted to start my first weekend back on Norwegian earth with a tasting of some of this country's new (and most welcome) quality brews.

So I went for the extremes- grandpa versus the baby. On the Norwegian quality beer scene Nøgne Ø brewery is almost a grandpa figure already, inspiring others to follow its uncompromising quest for quality.

For its 100th batch celebration they made a one-off brew, simply called #100. At 10% it cost an amazing 100 NOK (about 16 USD) at the state liquor store, most of it made up of alcohol (sin) taxes, I suspect, and maybe the reason why it was still available. It turned out that grandpa really decided to kick for his celebration, going for an Imperial IPA:

The baby in this meeting was the latest attempt from the Berentsens brewery in the province of Rogaland, more specifically in the town of Egersund, a hotbed for Christian fundamentalists who see beer drinking as the first step to hell. With the bland lagers produced by Berentsen and most other Norwegian brewers maybe they have a point. Or had, rather. Deeply rooted in this province myself, I really looked forward to a quality brew from this brewer.

It came copper-coloured with a creamy head that reduces to a film. Aroma is dominated by caramel with fresh citrus in the background. From this good start the flavour was a bit disappointing. The harsh bitterness really left most of the malty caramel flavours somewhat in the background, which is not quite what you may expect from an amber ale. The body is slightly watery.

Lack of perfection as there may still be, do we finally see the greening of Europe's northern beer desert?