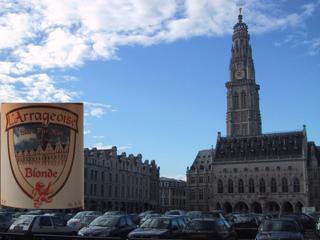 On my latest trip to Belgium I was tempted to explore Flandres. My base in Belgium was as usual Antwerpen, the biggest city in Flanders (Vlaanderen), but on this occassion my destination was the old French province with the similar name.

The old province name features also in the name of the main train station in Lille, Lille Flandres, which is connected to Antwerpen via Kortrijk and Gent by hourly trains. Or you could travel in style with the Eurostar service from Brussels, arriving at nearby Lille Europe station after only 38 minutes on the rails.

Bordering Belgium this province is probably France's beeriest, in competition with Alsace and Bretagne, and is known for its bières de garde. A good selection of these is to be found just down the road from Lille Flandres station at no. 66, Rue Faidherbe. La Vinothèque offers most things in alcohol, and luckily that includes also a good range of craft brews from the region.

Convenient as this shop is I was even more impressed by a find in the town of Arras, reachable by a 45- 80 minute train ride from Lille Flandres; the travel time depending on how many local stations you are lucky to call at along the line.

The service is friendly, knowledgable and unhurried, the prices are surprisingly good and there is a great selection of French, Belgian and Belgo-French beers. The latter category pretends to be French, but a closer look at the label reveals (if you are lucky) that it started life in one of the East Flanders villages of Lochristi, Melle or Ertvelde.

Even the beers named after the town, Arrageoise, belong to the latter category. They can be found on tap at Pub l'Arrageoise, conveniently located near the railway station at no. 39 of Boulevard Carnot, providing a perfect last stop before returning to Belgium, where the beers were actually brewed. 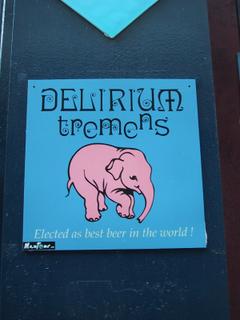 Last week I had a double dose Delirium.

Now, I have never been overenthusiastic about Delirium Tremens (or most of the other stuff coming out of the brewery Huyghe at Melle). The brewery has lent the name of its most famous beer (as well as financial support, I suppose) to the café with the greatest selection of beers in the world, confirmed in the book with obvious beer connections, The Guinness World of Records.

The location is in the heart of Brussels' Îlot Sacré district. To find it you first have to fight your way past the slick multi-lingual waiters in Rue des Bouchers, who offer some of the least favourable dining deals you can have in this great city. It actually takes a bit of effort to find the alley where Delirium Café and Jeanneke Pis (the "sister" of the more famous Manneken Pis) are located. The alley is called Impasse de Fidélité, and the café is located in no. 4A.

Delirium Café promises at least 2005 different beers. With its great opening hours, 10 am to 4 am every day of the year, it definitely represents a new and welcome trend on the Belgian café scene. Their web site, www.deliriumcafe.be, is also very informative.

I was very surprised to learn that a "sister" of Delirium Café just opened in Gothenburg. Of all places and just 4 hours bus ride from my home town Oslo. Their web site, www.deliriumcafe.se, does not yet give away much more than the address and opening hours. The latter are not as extensive as in Brussels; it does not open until 4 pm most days and slightly earlier on Fridays and Saturdays.

The selection is still 2005 beers with some interesting Swedish micros on tap. The café is bright and shining, a big contrast to the Brussels cellar. The beer selection from countries other than Belgium (and in this case Sweden) is still dominated by over-priced and unsexy macro beers, probably selected more for availability than quality. The Gothenburg establishment is an altogether more stylish version with friendlier service. There is food, too. As expected, the prices are sky-high above those in Brussels, but not over the top for a sin-taxed Norwegian.

Rumour says that there might soon be delirium in Stockholm also. I think we have found a cure for cold Scandinavian winters... 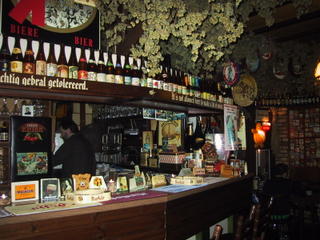 't Kroegske- the Little Café - is one of Belgium's top five beer cafés. Run by genuine beer lovers Danny and Nadine it offers 450 different beers according to Tim Webb's beer bible. No Stellas in sight, thank you. Perfectionism also take the form of prohibiting cigar and pmoke and allowing a maximum of 5 beers per person. This is a place where quality beers should be enjoyed without the interruption of smoke, drunken people or crying babies, for that sake. It is a genuine Craft Beer Temple, where the hymns take the form of Celtic folk music, discreetly played in the background.

The menu is beautifully decorated (though as usual in Belgium there are hidden gems- you will have to ask for their special aged beer menu). There is food on the menu as well. They even have an informative web site with all the necessary details as well as nice pictures, www.kroegske.be

So what is the catch, you may ask. Well, it can be summed up in one word: Availability.
't Kroegske is a weekend-only hobby business, open 19-01 on Fridays & Saturdays and 17-22 on Sundays.

Emelgem is not exactly the centre of the world. But neither is it completely out of reach of Belgium's excellent train service. It should take you a maximum of 15 minutes walk getting to and from the station of Izegem on the Brugge- Kortrijk line. Emelgem is just at the other side of the river from Izegem, which does not have a lot on offer except for this little café.

There are quite a few attractions nearby, though. Touring this part of West-Vlaanderen 't Kroegske is a natural last call before returning to Brugge, Brussels or Antwerpen. On Saturdays and Sundays you can start at De Dolle Brouwers in Esen, continuing on to Ingelmunster (van Honsebrouck or the Alvinne picobrewery) or Roeselare for some unfiltered tastings of Rodenbach. Westvleteren (avoid Fridays when everything is closed), Ieper, Watou and, well, Brugge, are all close by too.

There are few excuses for not making a pilgrimage to this beer temple.