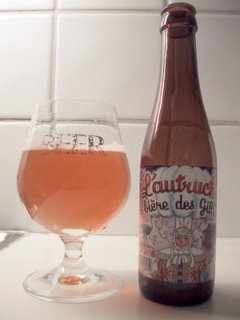 The Belgians have a more relaxed relationship to alcohol than most others. If you see drunken youths in Oostende a summer evening, they are more likely to be British than Belgians. So it is quite a paradox that it is Belgium that has given the world the term binge.

You will understand it if you are in Binche in the Wallonian province of Hainaut next Tuesday. Their Shrove Tuesday (or Mardi Gras, if you prefer) celebration is second to none, in my opinion.

Carnival is really the time when Catholic Europe comes alive. Also, the subsequent Lent might have been one motivation for the abbey beers, providing nutrients for the fasting monks.

The Silenrieux brewery celebrates the carnival with a cloudy orange-coloured beer called L'autruche Bière des Gilles. It is a rather sweet beer with flavors and aromas of coriander and oranges with some dryish yeastiness. Oranges are very appropriate for the Gilles, the townspeople clad up in costumes throwing oranges at people in the Mardi Gras procession (to the extent that local shopowners barricade their windows).

While in Binche you may also want to try the local Binchoise beers. Their Spéciale Noël was particularly pleasant having liquorice, caramel, and spicy yeast aromas with hints of pear as well as a complex mix of fruity flavours and coriander and some other dry spices. A solid caramel background, a dry yeasty finish and warming alcohol made it one of my favourite Belgian Christmas beers in 2005.

Carnival may justify a binge, but even more so the rich Belgian beer culture. Cheers! 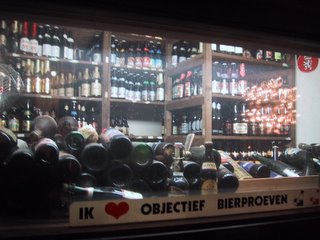 Time can do wonders with a good beer. It might well be the final judge of the quality of a beer, making it a life-time tasting event or an undrinkable affair that you would want to forget as soon as possible.

All the top five beer bars in Belgium offer cellar-conditioned beer. The grandfather of them all is Bierhuis Kulminator in Antwerpen. Run by Leen and Dirk van Dyck for 26 years at its present location, where they also have a good cellar. Recently they have trebled their cellar capacity here, allowing them to bring some goodies from an old cellar nearby their former café south of Antwerpen.

I was lucky enough to taste a thirty year old Liefmans Kriek that Dirk had fished out of his old cellar. An amazing experience - the beer was in a perfect condition, still with a lot of cherry flavour, but becoming more raisiny. It will be exciting to see what "new" old bottles will work their way from the old to the new cellar and eventually into the phonebook-sized beer menu, updated annually. That in itself may take some time.

Meanwhile, it may be worth storing some beers for yourself, preferably in a cellar that is well out of daily reach. A very good article on cellaring beer can be found here. It recommends a storing temperature of 13-15 degrees Celcius, somewhat higher than the 7-10 degrees prevailing in the Kulminator cellar. But then again you may not manage to keep your stock for thirty years.

The best beers for keeping? Time seems to have a preference for the strong and the bitter, the acidic and the sweet and sour. Lager is definitely not for lagering! 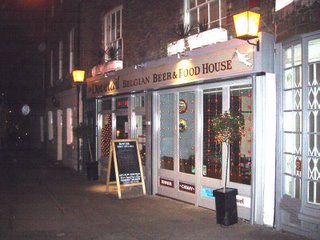 At the southernmost tip of Islington, bordering the meat market in London's Square Mile to the south, is the district of Clerkenwell.

Mystery plays have been performed here by parish clerks since the Middle Ages, and the street names are testimony of the district's monastic traditions.

It is almost a small mystery in itself to find the hid-way Jerusalem Passage. But once you have found that narrow path your reward will be The Dovetail, probably central London's best Belgian beer bar.

As if the 100 or so Belgian speciality brews on the menu was not enough for a Belgophile, the walls are covered by Tin-Tin cartoons and Belgian-style beer enamel commercials. There are small wooden tables with abbey-inspired sofa backs. The atmosphere is quite relaxed, at least in the early afternoon.

From Jerusalem Passage it is not too far a walk to Jerusalem Tavern in Britton Street, vividly described here, offering the full range of St Peter's beers. Reports say that this place as well as The Dovetail may easily get packed as the nearby offices close for the day.

So beat the clerks to the promised beer wells of Clerkenwell..