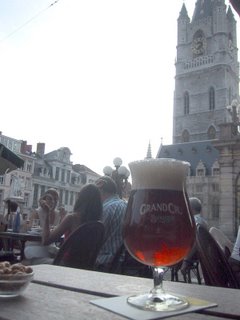 Two opposite trends on the sour beer front have appeared in Belgium lately. On the one hand you have the sweetening and rebranding to appeal to the Coca-Cola generation and girls, removing the end product further away from the original beer. They typically carry fancy names like Kriek Max, Timm's, Redbach and Newton. It is a trend that holds few prospects for the quality-conscious beer drinker (except that it may be one way for sour beer brewers to stay in business and create some serious stuff as well).

Luckily, there is also a trend towards authenticity, even among the biggest brewery groups. In August the Keersmaeker brewery, part of the Alken-Maes group, will launch a "new" oude kriek that is made the authentic way with real cherries and no artificial sweetening. It is a limited batch, but if you are in Belgium you may find it at the Delhaize supermarket chain.

Recently, Rodenbach is seen to be slowly moving back to authenticity. Their Oud Belegen Foederbier- (almost) literally old, matured oak tun beer- is an unsweetened beer made of 100% old beer, available on draught at only two beer cafés in Belgium so far- at De Zalm in the brewery's home town Roeselare and at 't Vosken in Gent. John White has an excellent web page describing the former plus a good discussion of the Rodenbach varieties. The picture above is, however, from 't Vosken- The Little Fox- situated at the atmospheric St.-Baafsplein in Gent. Behind the colourful beer is the grand Belfort- the belfry- whose Viking association I have described previously.

The beer has a refreshing, fruity, sour yoghurt aroma. Flavours are of sour berries, almost like a kriek, but with a sharp acidic edge. The finish is woody and very dry.

Enjoying the Foederbier in a grand medieval setting like St.-Baafsplein is a reminder that trends may be short-lived, but creating greatness takes time. 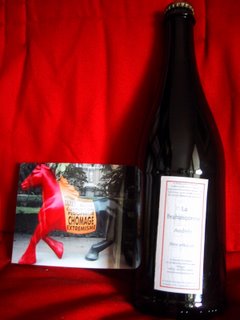 It is 21 July, and the federal kingdom of Belgium celebrates that it is exactly 175 years since Leopold I could ascend to the throne to be the first king of this young country.

It is a day for La Brabanconne- the national anthem of Belgium (and also the name of a statue at Surlet de Chokierplein near the Madou metro station in Brussel and a stone's throw away from the Bier Circus, until recently the best beer bar in the Belgian capital).

La Brabanconne is also the name of a range of beers from the new Brasserie du Brabant in Brabant-Wallon, a province described by Tim Webb as "a disaster area for beer drinkers".

On the picture is La Brabanconne Ambree. From the big, 75 cl bottle pours a deep amber beer with a good off-white head and 9% ABV according to the smallish label. Nose is chocolatey and spicey, and there are chocolate flavours with good hoppy bitterness throughout, a lot of fruit and hint of spices. Warming alcohol (as if that was what was needed this hot summer night), long chocolate aftertaste that is quite dry, and full-bodied. Worthy of its pompous name.

To many Belgians 21 July may not be much to celebrate (except for a day off work) - a legendary Antwerpen beer bar decided this year to honour 11 July - the Flemish "national day" celebrating their peasants beating the French noblemen in the Battle of the Golden Spurs- but remain open for business on 21 July. It is not hard to see that the "Belgian compromise"- though watered out somewhat by federalism- is not exactly to the advantage of the hard-working Flemish people.

In the flag it is the golden colour that unites the Wallonian red rooster with the black lion of Flanders. In everyday life it is the golden liquid. The Belgians may be at odds at home, but their beers have conquered the quality-conscious beer world! La Brabanconne could be one of them. 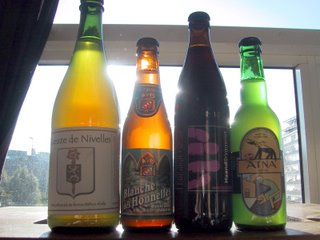 It is a sunny evening in the Norwegian capital, and with temperatures in the high 20s, it is time to look for some thirst-quenching beers. Honeymoon translates into Norwegian "wheat bread days", but for these worriless summer evenings (at least in our latitudes) I would rather have some wheat beers.

Days like these are not that common here up north, so it is only appropriate to celebrate with some rare wheat beers. The candidates are from left to right: Gueuze de Nivelles, Blanche des Honnelles, HaandBryggeriet Weizenbock and Atna hveteøl (Weissbier)- two representatives from Belgium and two locals- though the latter are German in style.

A real oude geuze must consist of at least 30 per cent wheat- that follows from the legal definition of a lambik. Gueuze de Nivelles is an experimental brew from the small brewery La Brasserie Du Brabant, situated in the Wallonian part of Brabant (unlike the major geuze makers, which are in the Flemish part, more specifically Pajottenland). It is a spontaneously refermented top fermented beer- cheers to Belgian originality!

The l'Abbaye des Rocs is one of my favourite Wallonian brewers, and their twist is a Dubbel Wit. Not that the 6% ABV of their Blanche des Honnelles is anything spectacular in Belgian context anyway. Ratebeerians seem to rate it among the top Belgian wits, though.

We had to wait a while before the Weizenbock from the Norwegian Haandbryggeriet (as opposed to the Danish micro with the same name) appeared in the state liquor store shelves. Traditionally an early spring beer to keep people nourished during Lent, this Weizenbock did not become widely available until very recently. In secular Scandinavia there should be no reason to wait until next Lent to enjoy it.

And finally a brew from another Norwegian microbrewery that kept us waiting, the Atna brewery. Despite Norwegian nationalist rhetoric on the label, it is the inside of the bottle that counts, and that is definitely a Bavarian Weisse with its strong banana aroma and flavour.

The wheat beer days are here to enjoy! Not to mention the exceptional wit (or weiss) nights!