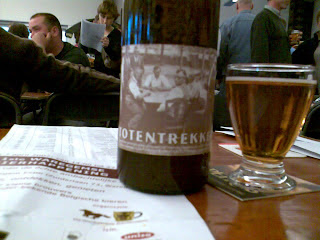 The villagers of Waregem may have been praying for a wonder. Though centrally located on the Gent-Kortrijk railway line and not too far from quite a few interesting brewers, this village of West-Vlaanderen is not exactly full of attractions. This Easter offered some hope that the prayers may have been heard. A new beer festival was born, appropriately named 1ste Waregemse Bierhappening, arranged by an almost equally new-born local association of Zythos, De Waregemse Bierfanaten.

Fanatic or not, they may have thought that the day would live up to its name; the festival took place on Stille Zaterdag- the quiet Saturday between Good Friday and Easter Sunday. 17 very small brewers offering tastings of some 70 beers, were lined up in the lobby of Waregem Expo. Arriving in the early evening I soon found out that the fanatics did not really need to do much lobbying- the place was packed with followers of good beer.

The beer makers were small indeed; the majority of them not even having their own breweries, and many a beer had seen the light of day (or hopefully not) inside the cellars of Alvinne, De Graal or De Proefbrewery. Among these were the festival beer, “ne Gèslotie”, brewed at De Graal and named after a bird as well as a person talking incoherently or maybe even wildly.

In fact, it was the wild young cuckoos of the beer world (or beers brought up by a commissioned brewer) that impressed me the most. The Buitenlust brewers had with the help of De Proefbrouwerij come up with an interesting new Flemish sour ale, combining top- fermenting yeasts with wild yeasts and sour cherry juice. The resulting Totentrekker has some really appetizing sour yoghurt flavours as well as good fruitiness.

Also De Struise Brouwers, these days brewing at Deca, showed their wild side at the beer festival with a new beer called Struiselensis, combining the wild-like Brettanomyces Bruxellensis and ale yeast, both supplied by Wyeast. Meant as a tribute to the Lembeek brewers it does indeed come close to a geuze.

So thanks to the friendly fanatics and some wild brewers we had a wonderful evening in Waregem.