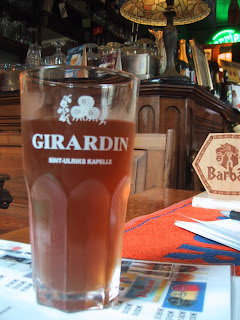 The clouds over Beersel in Pajottenland are luckily of political nature rather than beer-related these days, though the discussion over the Brussel- Halle-Vilvoorde constituency has enough dynamite in it to threaten the stability of the entire kingdom. In the 90s the two geuze makers of Beersel were struggling, but these days things have brightened up: Drie Fonteinen ventured into lambik brewing in addition to the geuze blending in the beginning of this century, and there seems to be new life at the Oud Beersel brewery.

Beersel makes for a nice excursion from Brussel. The whole trip takes only about half an hour. The best day to go is probably Friday when most cafés as well as the Drie Fonteinen brewery outlet are open, and there is a train service. I went there on a Sunday, taking the local train to the station of Ukkel-Kalevoet, where there is a connection to De Lijn bus no 154.

The obvious starting point in Beersel is the Drie Fonteinen restaurant, just across the church. Run by the brewer's brother it offers lambik, faro and kriekenlambik in addition to some bottled beers as well as hearty meals. Admittedly, the only relatively young feature at the restaurant is the jong lambik (jong here meaning about 1 year in barrels)- otherwise it is the reign of grey hair. The middle-aged waitresses are quick and friendly with orders in Dutch answered back in English- they are used to foreign beer tourists here! I took a special liking to the kriekenlambik, a perfect blend of lemony lambik with mellow cherry and almonds flavours, ending dry as wood. Can a kriekenlambik get any better than this? The only thing I missed at this splendid restaurant was an oude lambik- they should have some by now.

My next stop was the hotel, restaurant and café Centrum. I opted for the cosy café, which seemed to be the very best in the village with a decent beer list, including Girardin oude lambik and kriekenlambik, and well worthy of a full entry in Tim Webb's Good Beer Guide. I had previously tasted jonge lambik from Girardin at the excellent restaurant De Rare Vos in Schepdaal. It had an interesting leather-like aroma with a touch of toffee. The flavours were surprisingly harmonious with sweet toffee flavours, hints of dry wood and refreshing citrus. The oude lambik, having spent up to three years in the barrel, was very different. Still slightly unattractive in appearance with just a few bubbles gracing the surface. Now raisins and vanilla reached for the nose, and in the mouth the winous liquid revealed lemons, wood and not least vanilla. Two highly different, but wonderful beers in themselves; blending them makes the world's best geuze in my opinion.

The road goes slightly downhill to In de Oude Pruim (the old prune), and appropriately the most exciting beer the deserted café could offer was the most inferior of the Girardin range, the Ulricher Lager Extra. Better luck then at the Café Camping- if only for its atmosphere as a café for the local football team and the adjoining camping ground. Where else is a camping ground served by a café offering the champagne among beers, oude geuze?

The politicians should know that when the storms rage over Pajottenland, there is refuge in some of the most tranquil and traditional cafés around. The heritage they represent is bigger than the question of constituency borders, and it has survived the biggest enemy of all: indifference. 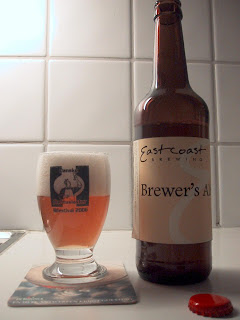 May is beer fest month in Europe. On May 11-13 it is time again for the annual festival called the Copenhagen beer days, a festival that could well have been branded “probably the best”. Well-organized (though its success means it is growing out of its venue of Valbyhallen) and with a great choice of both Danish and imported beers as befits the merchant nation of Denmark. Ideas of a truly European craft beer festival have been aired, and I can think of few better organisers of such an event than Danske Ølentusiaster, the Danish beer consumer organisation, the host of the Copenhagen beer days.


During the festival the Scandinavian Home Brewing Championship will take place. Here enthusiasts who enjoy not only drinking good beer, but also making it, have a chance to meet.

I have had the pleasure of running into two of those enthusiasts this Easter and last. The venue was, appropriately enough, the Kulminator in Antwerpen, which gets filled up with Danish beer pilgrimes every Easter. Eastcoast home brewers Michael and Tom kindly donated a bottle of their Brewer's Ale (on the picture) last Good Friday, and it is definitely not a beer for crucifixion. It has nice orangey amber colour with a thick off-white head, yielding a grassy and sweet aroma, and flavours that balance well, though a bit on the sweet side.

Copenhagen is truly wonderful, but at the time this year I will be touring some other low countries. Beer festivals will not be missed, however. A well-reputed student festival in Vilvoorde, a new beer fest in St Olen in Belgian Limburg (that I may have to forego, though), and a Meibockfestival in Amsterdam's Helicopterstraat (at De Prael brewery) makes sure that the Low Countries remain a highlight even in the high season of European beer festivals.