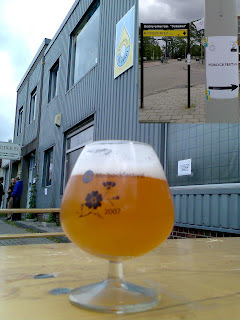 It is not exactly pomp and circumstance- in Dutch: pracht en praal- you would associate with this part of Amsterdam. No, I am not referring to the Red Light District, but rather to Helicopterstraat, which is a street in an industrial area towards the airport and, more importantly, the present address of De Prael brewery.

The brewery- one of three microbreweries/brewpubs in Amsterdam- was recently the host of the 10th Meibockfestival, which is organised by the Noord-Holland arm of PINT. The festival is dedicated to the Meibo(c)k, traditionally the last strong beer brewed before the summer season (when it was impossible to brew). De Prael has, according to the definite guide on Dutch breweries, always struggled with the same issue- the brewery simply becomes too hot in summer. A hot issue was also the name originally chosen- De Parel (the pearl)- as the Budels brewery already made a beer with the same name. A new identity soon had to be found, and reshuffling some letters still made it sound a bit pompous, so to speak.

The organisers originally had some doubts about the location- it is somewhat off the beaten track. Not to be deterred, the organisers did an admirable job promoting the festival- every hundred meter or so from the Henk Sneevlietweg metro station there was another sign pointing the way. A good effort that many a Belgian beer festival could learn from- but then the Dutch were always better at marketing, anyway. Seating is generally more sparse at Dutch beer festivals, though, and the Meibockfestival was no exception in that respect. The whole brewery and living room-like bar is concentrated on the first floor of the building, from which a dangerously steep, provisional staircase led down to the outdoor benches supplied for the occasion. A concentrated effort was needed to hold on to the tasting notes (and glass for that sake) in the windy weather.

Back to the Meibock, often written Meibok in Dutch, or Lentebok (spring bock, thus allowing it to be released earlier) or even Paasbier (Easter beer). It is a paler and often more bitter version of the bock beer, and goes under the term Heller Bock on Ratebeer. Naturally, De Prael had their own lentebock at the festival (in addition to a special jubilee beer): André is named after levenslied singer André Hazes - all De Prael beers carry the first name of Dutch folk music singers. The aroma is spicy and fruity with definite notes of orange, and the flavours add to that good bitterness and some yeastiness. André is a full-bodied, hazy orangey amber beer, that I found very nice. I am tempted to quote an André Hazes hit: "Wij Houden Van Oranje"- we love Orange.

Hopefully, De Prael will be able to brew beyond May when they move to new premises in the old auction house, the Veilinghuisje, in the middle of the Red Light District. Eventually, there will also be a shop and a proeflokaal there. Promoted by the local authorities as one of several projects to save the problem-ridden area in the northern end of Oudezijds Voorburgwal , it is located just across the Salvation Army and close by Our Lord in the Attic, originally a place of worship for oppressed souls. Saving souls may be stretching the philosophy behind De Prael a bit far, but the brewery was originally set up to help people with some distance to the job market back to work.

The Meibockfestival started out in the premises of the old Maximiliaan brewery, that closed down in 2001. The brewing facilities are back in use, now as the brewpub De Bekeerde Suster of De Beiaard group, located just a stone's throw from the Veilinghuisje. Maybe the Meibockfestival now comes back to the Red Light District and perhaps even converting some souls from red decay to amber glory.