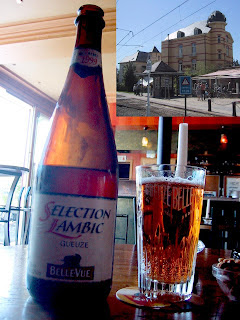 Torre may conjure up images of some semi-tacky resort on the Costa del Sol, but there is a Torre of the highest class on another coastline further north on the continent. It can hardly be called the sunshine coast, susceptible to some harsh North Sea weather, but whether the sun is shining or not, I know which coastline I would rather be on.

Café De Torre is only one of many attractions on the tiny stretch of Belgian coastline, and it is definitely one of the beeriest- only Café Botteltje in Oostende may have a bigger selection. Situated in the picturesque village of De Haan -The Cock- it is only a 20 minute tram ride away from either Oostende and Blankenberge, both with excellent train connections to the rest of the country.

The tram service, called De Kusttram, covers almost the entire 65 kilometers of Belgium's coastline, with frequent departures and passing by many delightful sights on the way. One of them is the Art Nouveau tram station De Haan aan Zee, celebrated by the Strubbe brew Trammelantje Den Haene. That beer and its sister, Haanse Witte Den Haene, are brewed for the local butcher/bottle shop, but unfortunately the reviews indicate that the beers may be less than artfully crafted.

Craft brews they still made at Belle-Vue until 1999. That is the last vintage seen of their splendid Sélection Lambic, a few bottles of which have still survived until today at De Torre, literally towering behind the Art Nouveau tram station. A masterpiece of a beer it is, appropriately only available from a big bottle. With a clear, deep orange-golden colour it can still master a small, but stable head. The sour fruit aroma hints of yoghurt, and promises a complex taste sensation of sour, fruity yoghurt developing towards a dry, almondy finish that lingers.

The villa housing De Torre is a fine example of Belle Époque, and the café owners are keen to make sure that beer tourists as well as other guests have a good time. With more than 250 different beers on offer the former are bound to be happy, and it did not exactly ruin my day to be offered a taste of Drie Fonteinen Oude Geuze Vintage. It reassured me that even though Belle Époque and Belle-Vue craft beer may be a thing of the past, Belgium still does not only possess the skills and dedicaton to make unique beers, it also has some truly outstanding places to enjoy them.