The Beer Hunter is Gone 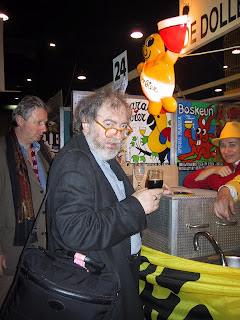 The world has lost its greatest beer writer. Michael Jackson passed away this morning, aged 65. Michael became world-famous in the late 80s with his television series "The Beer Hunter" on Discovery Channel.

He discovered beers and beer styles that few people had heard of, and his well-written books on beer are all seen as the authoritative guides on the topic. His books - starting out with the "World Guide to Beer" as early as 1977 - provided the ultimate inspiration for the craft beer movement.

The picture is taken at the Dolle Brouwers - the crazy brewers-stand at the Zythos beer festival 18 months ago. Michael Jackson was a regular at Zythos as well as at the smaller Bier Passion festival in Antwerpen.

Passionate about beer he certainly was, at the time probably seen as "doll", (but never dull). In the end his beer knowledge was unrivaled. 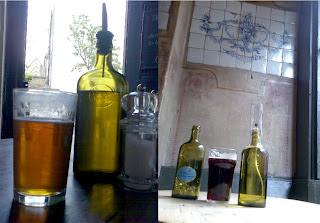 The waterways of London have kept their rough charm, serving as a reminder of Britain's great industrial heritage. Charming are also some of the waterholes found nearby. Not far from The Regents Canal is the Pearly Queen of them all, The Wenlock Arms, a true cultural institution. With a good and ever-changing range of interesting real ales on cask, this free house is also very much a meeting point for the locals.

Übercool Hoxton, that was not too supportive of the Pitfield Brewery and Beer Shop, more or less forcing it to relocate to Essex, is just half a mile away, yet it remains a world apart. The Wenlock Arms is down-to-earth, seemingly untouched by Caffe Latte and the rule of Millenium Minimalism, it is Cockney London at its best, with the lads dropping by after a friendly Sunday football match on the common across the street. And when jazzy tunes are sounding from the piano next to the door, you know you will not be leaving anytime soon.

Not far from The Wenlock Arms, on the other side of the canal, is The Duke of Cambridge, or at least the pub named after him. It is a varied neighbourhood with a mix of refurbished Georgian houses in between more dreary block of flats. The Duke goes for an altogether more contemporary craze suitable for the politically correct Islingtonians- organic food and drinks. The emphasis is on food, but at least that means plenty of seating. And there is nothing wrong with being trendy if it implies a genuine commitment to quality. I did not try their food (which I regret), but the carefully selected beer list was a reliable enough witness: a solid range of ales from the Pitfield Brewery, including the first London organic draft bitter – ‘SB'’, brewed exclusively for the pub.

The street sign reads St Peter's Street, and the pub is one of few places where you can find the Organic Best Bitter from the St Peter's Brewery on draft. You would suspect it after noticing that the olive oil dispensers on the tables are old St Peter's bottles.

The true mecca for St Peter's beers is, however, the brewery's own pub, The Jerusalem Tavern. Inside, oil lamps made from the beer bottles have been prepared for the anointed. But while the bottle may be a copy of a Philadelphia flask dating from around 1770, the building itself has been around since 1720. Old and well-used she may be, the pub still attracts a crowd of office workers every weekday. The building is almost a century and a half older than the nearby meat halls of Smithfield, on which site livestock has been traded for more than 800 years. Outside the market hours (4 am- 12 noon) there is precious little evidence of this activity except for the huge halls-the Farringdon area is these days the home of trendy cafés and night clubs.

Steeped in history, the area may well have given name to one of the world's beer styles. Porter used to be the favourite thirst-quencher for the market workers- the porters- in the 18th century- long before the arrival of pale Burton ales and continental lagers.

The Jerusalem Tavern therefore feels like the perfect setting for tasting St Peter's Old Style Porter. It pours dark brown with a red glare, crowned by a beige creamy foam. Releasing a lot of chocolate aroma with hints of vanilla, the beer can boast of good roasted flavours, bitter chocolate and a dry, bitter finish.

It is a beer to be welcomed not only by craft beer tourists and market porters, but probably also by the Pearly Gate guardian. It has certainly not been watered down by trendy blandness, but kept a steady course on the narrow canal of traditional craftmanship.