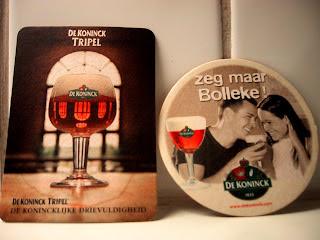 When old attraction pales, new approaches are needed. Some Belgian pale ales have seen their volumes dropping as post-industrial Belgium is consuming less beer and more wine. The thirst for Belgian craft beer from the rest of the world has been more important to the smaller breweries, often with more assertive beers.

Assertive the pale ales may not be- their beauty lies in their drinkability and balance. Not least so for De Koninck, which is still the reigning beer in its home city, Antwerpen. As indicated by the beer coaster, all you have to say is bolleke- literally a small ball- to get served their refreshing amber ale in its famous bowl-shaped glass.

It comes copper-coloured, usually with a decent head. Yeasty aroma combines with hay hoppiness. Good toffee caramel are married with spicy fruit flavours. With a clean dry finish it is a characterful thirst-quencher.

Thirst-quenching has always been possible around the brewery, located along the old (stone) road to Mechelen, the Mechelsesteenweg. The most famous café was probably Café Pelgrim, where the surplus yeast from the brewery across the road was served in shot-glasses as a tonic. For years it functioned as the unofficial brewery tap, but appearantly that did not pull enough pilgrims, so since March the doors have been closed for good.

The doors will open again next year. Café Pelgrim and its neighbouring café, also bankrupt, will be converted into one big beer café, and there will be a new brewery museum in the adjoining building, marking the 175th anniversary of Brouwerij De Koninck. When Joseph De Koninck started up his brewery in 1833, it was originally called Brouwerij De Hand, from the signpost marking the city limits of Antwerpen. The symbol of Antwerpen and De Koninck has always been the cut-off hand . In what is essentially a rebranding of the old port city on the Schelde, the hand is increasingly rarely seen, replaced by a cool, capital A.

The hand lives on, however, in the name of what is essentially the new, unofficial brewery tap, Afspanning De Hand. Afspanning is another Flemish word for café, literally meaning relaxation (where you can get restored as in a restaurant). The focus is indeed on food. All the De Koninck brews and no others are available- which makes a selection of five beers, including the seasonal Winterkoninck.

To compensate the beers are available in as many as six different glasses: in addition to Bolleke, there is a choice of a Bol, a Prinske, a Prinses, a Fluit and a Handje. Given a choice, I would rather see more brews and fewer glasses.

I shall not complain, however, if the flirt with a new generation of beer drinkers is necessary to keep up the commitment to quality brews. Commitment usually begins with a flirt