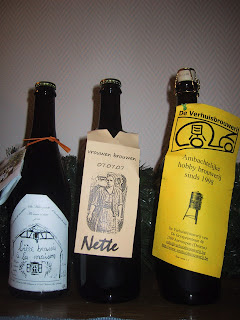 You certainly have to leave home (or your hotel room) to get to the best beer shops in Belgium. One of the best is undoubtedly Bierhandel Willems in Grobbendonk, a village in the Antwerpen province and a 40-minute bus ride from the Sinjorenstad itself. Willems en zoon stocks 300 different beers, and among them are quite a few rarities, including the three on the picture.

The bottle on the left is, I think, as close as you can get to a commercially available home brew, Bière Brassèe à la Maison. The female brewer has supposedly turned her bathroom into a brewery, called Brasserie La 42ème. Except for the location in a village near the Wallonian capital of Namur, little is known about this microbrewery. The beer turned out a bit too spiced, but by all means drinkable ( and far from being a candidate for my bathroom zink!)

There are women behind the beer bottle in the middle, too. It has become an annual event for the female (lead) members of OPA- Aalst Objectieve ProefAjuinen, one of the 24 local associations making up the Belgian beer consumer organization Zythos, to brew a beer. (In Vlaanderen, the inhabitants of Aalst are known as ajuinen-literally onions/buds- and objective taste buds were always the ideal of Zythos' predecessor, De Objectieve Bierproevers.) Supervised by chief brewer and leading beer authority, Jef van den Steen, at Kleinbrouwerij De Glazen Toren, this year's beer turned out a decent honey beer named Nette.

A little help from a bigger brewer was also necessary to bring the bottle on the right to the market. De Verhuisbrouwerij - the portable brewery - is a "hobby brewery" run by five enthusiasts in Antwerpen since 1998. They bring their 30 liter brewing facility with them in their caravan to your party/event, where you can witness a typical 9am to 5 pm brewing session. The beer that is brewed in the session, is only for the brewers' own consumption, though (following the legal definition of homebrewing, I suppose), let alone available after a 3-month process of fermenting and maturing. Knowing Belgium, it would surprise me if informal arrangements cannot be made to overcome the legal bits.

The "proef" is in the tasting (literally in Dutch), so together with the brewing equipment they bring their "big brews" for tasting sessions. These beers are the result of successful recipes that they let commercial brewers produce under licence. These give a small contribution towards some of the costs involved in this hobby. Or, as the hobby brewers say, you can support an association by buying a membership card or in this case by drinking a beer. An easy choice in my (and their) opinion.

So it was with good conscience that I opened my Trisser VI, a blond tripel brewed for De Verhuisbrouwerij at De Proefbrouwerij in a quantity of 1100 litres. My 75 cl bottle had been filled on 27 March 2007, and inside 7.6% ABV was kicking. It poured hazy golden with some orange below a rich, lacing head and released some herbal and piney hop aroma. The initial taste is sweet, but with good offsetting bitterness as well as some yeasty bread flavours. Spicy notes completed the picture of a more than decent beer.

Trisser is actually the nick name given to a student retaking the same exam for the third time, and this tripel is no doubt a comforting beer for such a fate. Maybe an appropriate beer for De Verhuisbrouwerij to bring to the excellent Vilvordia student beer festival on May 18, where they are scheduled to have one of their brew days.

Rolling home brew out to the beer lover community sounds like quite a good idea, if you ask me. Not because the monetary contribution is likely to make any difference nor does the brewing session necessarily open a new world to seasoned craft beer enthusiasts. However, the best beer bottles are tales of a great brewing talent, and sharing a talent tends to improve it. It is time for the best to leave home.