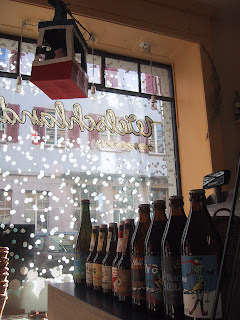 Belgium is not the only country split along linguistic lines in Europe, but there is a country that tackles it much better. Whereas the best Swiss microbreweries are looking to Belgium for inspiration, the reverse should have been true for Belgian politicians. But then again, copying the Swiss model would leave many of them without a job, so I suppose it is out of question.

Switzerland has as many as four official languages with Romansh having the same marginal role as German in Belgium. Meanwhile, in Switzerland the German-speaking region, Deutschschweiz (mind the consonants if you are drinking!), is by far the biggest.

Welschland is a schwützerdütsch (the Swiss dialect that can frustrate any student of Hochdeutsch) nickname for the Swiss French-speaking region (which prefers to be called Romandie).

The is nothing derogatory about Welschland in Zürich, however. A wealth of artisanal products from the Western, French-speaking part of Switzerland is competing for your attention (and luggage space), including sausages, wine, cheese and, of course, beer. At the time of my visit they had only 10 beers, all lined up in the picture, far less than the major beer supplier in town, the centrally located Drinks of the World. Unless you have a particular liking for similar-tasting blond lagers though, you will find the beers of Welschland far more rewarding.

In fact, I encountered surprisingly few memorable beers from Deutschschweiz despite its proximity to Germany. The friendly co-owner of the Welschland delicatessen explained that the poor growing conditions for grapes, especially in the cooler Jura canton, paved the way for beer brewing there. It cannot fully explain why all the best craft beers are made in that region.

One of them, BFM- Brasserie des Franches-Montagne, occupies 10 of the top 20 twenty ratings for Swiss beers on Ratebeer, a position resembling that of Nøgne Ø in Norway. The decent beers of the Trois Dames brewery of the nearby Vaud canton do not reach that high only because they are generally rated by too few people. Both give a successful Swiss twist to beer styles originating in Belgium and beyond.

La Salamandre by BFM was among the beers in my luggage that managed to escape the destructive efforts of the SAS Ground Staff at Copenhagen Airport- for their careless and beer-hostile luggage handling I wish they be served Bud Light in all eternity. In contrast, La Salamandre is orange golden and cloudy with an admittedly minimal head. The nose is acid and complex, revealing lemons, orange zest and spices. Flirting with geuze characteristics. The sour lemony and orange zest flavours find balancing honey sweetness. An outstanding beer - a flavourful ambassador for this otherwise neutral country.

Unlike the Belgians the Swiss always preferred to perfect their own little world rather than conquering the rest of it. Unfortunately, perfectionist Switzerland seldom turns out beers that deviate from the main. But when they actually do, their craft beers should feature high among enthusiasts worldwide. Finding the good stuff remains a challenge, though.

hello, this is very good information for me i am looking for it i have search many websites,but know i get the actual information thank you. Gulmarg's legendary beauty, prime location and proximity to Srinagar naturally make it one of the premier hill resorts in the country. Originally called 'Gaurimarg' by shepherds, its present name was given in the 16th century by Sultan Yusuf Shah, who was inspired by the sight of its grassy slopes emblazoned with wild flowers. Gulmarg was a favourite haunt of Emperor Jehangir who once collected 21 different varieties of flowers from here. Today Gulmarg is not merely a mountain resort of exceptional beauty- it also has the highest green golf course in the world,Kashmir Tour Packages at an altitude of 2,650 m, and is the country's premier ski resort in the winter.

Hello Everybody,
My name is Mrs Sharon Sim. I live in Singapore and i am a happy woman today? and i told my self that any lender that rescue my family from our poor situation, i will refer any person that is looking for loan to him, he gave me happiness to me and my family, i was in need of a loan of S$250,000.00 to start my life all over as i am a single mother with 3 kids I met this honest and GOD fearing man loan lender that help me with a loan of S$250,000.00 SG. Dollar, he is a GOD fearing man, if you are in need of loan and you will pay back the loan please contact him tell him that is Mrs Sharon, that refer you to him. contact Dr Purva Pius,via email:(urgentloan22@gmail.com) Thank you.