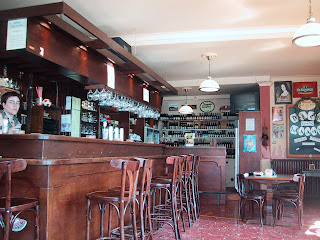 The doors have closed for the last time for many Belgian beer cafés over the last few years, especially those off the beaten track. As the Belgians are drinking less beer, their beer cafés are becoming more dependent on beer tourists from abroad.

I was lucky enough to visit both Kaffee Barbier and Café 206, but never came around to blog about the latter, situated in the Antwerpen village of Sint-Katelijne-Waver, before it was too late. I regret not making it to Eglantier in Sint-Truiden or De Oude Speye in Damme. The best remaining beer cafés in rural Belgium are mostly weekend-only establishments, where the owners are making a living outside the less lucrative café business during the week. Examples of the latter are 't Kroegske and De Gans.

On the tourist trail the story is quite the opposite. The beer scenes in Brussels, Brugge and Gent are booming. The best beer selection these days is found at Delirium Café in Brussels and at Bierbrasserie Cambrinus in Brugge, cafés that have seen the light of day only during the last few years.

So it was with curiosity and delight that I approached a great "new" beer café in the less-visited, northeastern corner of Flemish Brabant, specifically in the little town of Diest. Ons te Huis, which translates as At our Home, has been around for some years, but this year their beer selection trebled as they started combining as a beer store. The deal is that the 170 beers in the yellow section of the menu are available cool and served in their correct glasswares. The 350 beers in the green section of the menu are from the beer store, but if you want them served in the café, just let the barman (or woman) know half an hour before, and he will have the bottle cooled for you.

The café may look quite plain, not unlike the bars found across the border in the Netherlands, but the service is unparallelled (the barman even helped me remove the beer labels for my collection). Winand and Moncy, the couple running the place, make sure that Diestenaars and others who find their way to Diest, are faced with an open door 7 days a week from early morning till late at night (the only exception being Mondays, when their home opens at 4 pm). Many of the beers are hard to hit elsewhere, and they are without exception sold at very democratic prices.

Indeed, my wish is that the locals vote with their feet and take advantage of the hospitality offered by Ons te Huis. It may not be the closest to the big sights, but in my opinion the rich beer culture of Belgium is dependent on locals like this to stay open.