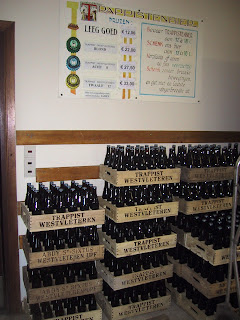 "In Flanders Fields the poppies blow".

In the western corner of Vlaanderen, De Westhoek, not only poppies, but also hops grow. The area is home to some of the best brewers in the world, notably the Sint-Sixtusabdij at Westvleteren and De Struise Brouwers, who brew at Deca brewery in nearby Woesten-Vleteren.

The former is already a beer tourist pilgrimage destination, and the ostrich farm of the latter may well gain popularity with the opening of a brewery shop there.

The abbey of Sint-Sixtus itself, including its brewhouse, is beyond reach, and the brewery outlet also has more limited availability these days. It is open only from 2-5 pm, closed on Fridays and Sundays, and beers can only be bought (in crates of 24 bottles) with a reservation. The new restrictions seem to have relieved the surrounding area of the traffic jam that arose after the great publicity around the Westvleteren beers being rated as the world's best.

The most likely source for beers to take away may well be the little shop in a corner of the café and visitors centre, In de Vrede (The Peace). It is just across the street ("in the shadow of the Sint-Sixtus abbey"), owned by the abbey and open every day except Friday, the day of the crucifiction. The beer is sold in nice-looking sixpacks.

On the day of my visit, only the Extra was available from the shop. Judging from the best-before date, which is 3 years after the bottling date for all the Westvleteren beers (a mere formality, of course, since at least the 8 and 12 will improve for years beyond that if stored correctly), the beer had just been released from the warm room. There it is conditioned at 26 degrees Celcius for 10 days, according to Chuck Cook, one of the anointed few to get granted a visit behind the abbey walls.

As can be seen from the picture, the monks recommend that their beer be served and stored somewhat cooler than that; to be kept at 12-18 degrees C and served at 12-16 degrees is their recommendation.

Served at correct temperature and in great condition are all the three beers in the café proper, where one quarter of the total production ends up. In addition to the beer, the café serves up lighter meals such as a hommelpaptaart - hop porridge tart- that actually does not feature any hops in its recipe. Indirectly it certainly does, as it is made with the hoppy Poperings Hommelbier from local brewer Van Eecke. The ice cream, however, is made with Westvleteren Extra/ Westvleteren Blauw (the blue cap)/ Westvleteren 8- a dear child is known by many names. As always, for all you want to know about Abdij Sint-Sixtus and In de Vrede few web sites are as thorough as the one of the late John White.

Though spacious, In de Vrede fills up quickly in summer; many of the tables may already have been reserved. Judging from my observations, the combination of quiet country roads and world-class beer is appearantly not a good recruiting ground for a Bob- the term for a designated driver in the Low Countries.

My Bob was the belbus, the De Lijn mini bus on call, which leaves once an hour (if needed) and must be booked two hours in advance. For out-of-towners it is worth noting that the timetable seems to correspond well with the hourly train from the terminus of Poperinge. It is not unlikely, however, that the likeable little West-Vlaanderen town of Poperinge, famous for its hops and hop festival, may lure you to stay a little longer. There is a hop museum and a couple of decent bars. Among them is another café dedicated to peace, Café de la Paix.

The café names cannot disguise the fact that De Westhoek will forever be associated with The Great War rather than peace. After Poperinge the train calls at Ieper, the end of the line for a generation of men some ninety years ago, where the evidence of WWI is everywhere, but few places as strongly as at the Menenpoort with its 54,900 names of men lost and where the Last Post is played every evening.

The Flanders Fields have some chilling reminders of the horrors mankind can create. On the other hand, their brewers also prove what greatness can be achieved.

Comments:
Ieper I guess is better known under the name of Ypres. Or Wipers, as the rather grim statue in the Imperial War Museum has it.

Yes, and Poperinge, which became the centre of the British Army, was known as "Pops". I generally prefer to use the local place name, rather than the English one, even when writing in English. I may deviate from that rule when I start blogging about the Japanese ji-biru scene, though...

This comment has been removed by a blog administrator.

Hey Tore, thanks for linking to my Westvleteren article. I'd send you an e-mail but see no contact info on this blog. Mine is chuck@beerandtravel.com
I've uploaded nearly 300 photos taken during my three visits to Brouwerij Westvleteren, here:
http://www.flickr.com/photos/belgianbeerspecialist/sets/72157603966458566/
Cheers,
Chuck C.

India is know as golden bird because of its beauty. There are several beautiful place like hill station,beach,temple,fort and so many things.KERLA is one of them IT is known for natural beauty.
If u want to go kerala in India then must visit on

hello, this is very good information for me i am looking for it i have search many websites,but know i get the actual information thank you. Gulmarg's legendary beauty, prime location and proximity to Srinagar naturally make it one of the premier hill resorts in the country. Originally called 'Gaurimarg' by shepherds, its present name was given in the 16th century by Sultan Yusuf Shah, who was inspired by the sight of its grassy slopes emblazoned with wild flowers. Gulmarg was a favourite haunt of Emperor Jehangir who once collected 21 different varieties of flowers from here. Today Gulmarg is not merely a mountain resort of exceptional beauty- it also has the highest green golf course in the world,Kashmir Tour Packages at an altitude of 2,650 m, and is the country's premier ski resort in the winter.