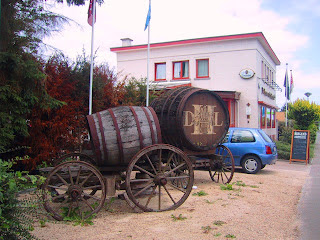 De he(e)ren- the gentlemen- in question are the De Four brothers, the men behind the outstanding beer café and restaurant De Heeren van Liedekercke (DHL). If there is a café in Belgium where only superlatives apply, this must be it.

The barrels in front of the building are promising enough signs, but as usual in Belgium there is more than meets the eye. The restaurant is on the ground floor, and there is a nice garden terrasse at the back in addition to the downstairs seatings. When the café/restaurant is busy (and even when it is not), it is not a bad idea to sit close to the bar to attract the waiter's attention.

Joost De Four may be the master of the beer bar and cellar, but his brother Tom rules in the kitchen. He has received many awards over the years; best game chef in Belgium, best fish cook, and recently the best sandwiches in Vlaanderen were also said to stem from his kitchen. My beef in champignon sauce made with Pater Lieven Tripel was definitely a culinary highlight on my latest trip to Belgium. At the Zythos Bierfestival they have been known to promote bierpralines, made in cooperation with a chocolatier in Aalst. As with chocolate and beer, the brothers are an unbeatable combination.

Perfectionism also shone when the wedding between Joost and Jessica was celebrated five years ago. Two oude geuze were specially commissioned from the then (just) geuze blender Drie Fonteinen: J&J Oude Geuze Blauw (for the groom) and J&J Oude Geuze Roze (for the bride)- the former is a blend of 1 year old Lindemans lambiek and 4 year old Girardin lambiek, whereas the latter is a blend of 1 year old Boon lambiek with 3 years old Girardin lambiek. As expected when the best beer café in Belgium teams up the best geuze blender, the result is world-class beers. They are only available at the DHL, but in Belgium you can even buy beers to take away from cafés, a practice unheard of in over-regulated, stern Northern Europe.

Welcoming as the place is, you will still be faced with closed doors on Tuesdays and Wednesdays, and with limited opening hours on Mondays outside the summer season. You can get there by train or by De Lijn, but the train is faster. From Brussel there are direct trains to Liedekerke. From there it is a 20 minute walk along the seemingly never-ending Stationstraat. Iddergem station (make sure not to confuse it with Idegem station on the same line; believe me, the only facility there while waiting for the train back is a frituur café) is closer, but you will have to change trains at Denderleeuw. The next big railway project may well bring it even closer. Inspired by the Parisian RER, the GEN - a regional express network around Brussels - is being built. My hope is that whilst bringing beer tourists easier to Liedekerke and around in Payottenland, the network does not challenge this unique part of Vlaanderen with its rich beer culture.

De Heeren van Liedekercke is indeed situated just a stone's throw from Payottenland- the Liedekerke municipality and the Vlaams-Brabant province are just across the nearby river Dender. No wonder then that DHL is especially strong on the lambiek and geuze family.

There is also an old beer list, but you have to ask for it. It may not be as extensive as at Kulminator, but it is very well-picked, featuring many geuze treats from breweries long gone. I had a Kriek from the now defunct brewery De Wets; De Heeren estimate that it was bottled in 1990. 18 years later the burgundy-coloured beer still produce a smallish white head. The body has probably gotten thinner with the years (though I was too young to taste it in 1990), but the port aroma is potent as can be. Good raisins aromas and flavours as well as some cellar character. You can still taste the cherries, though. Truth is that greatness ages well, and if I had been allowed to rate it on ratebeer.com, I would have given it 4.4 out of 5 (but the Belgian administrators of that site run a stricter regime of which beers can be entered than their UK and US counterparts, especially for defunct breweries where only few bottles remain commercially available).

DHL is strong on trappists as well, aged or not. Indeed, if you order an Orval, you will get a bottle that has been aged for 6 months unless you specifically ask for a fresh bottle. The Ambassadeur Orval title was granted to 340 cafés, taverns and restaurants which promote Orval with good presentation, service and originality. An obvious PR stunt from the brewery's side, but needless to say, DHL qualifies.