Kris Not To Be Missed 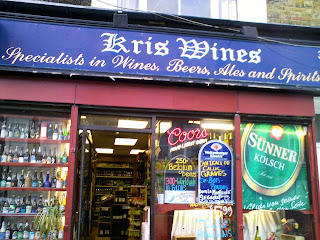 I have for too long. Regularly in London, yet still managed to avoid this find.

Kris Wines is the second best beer shop in London, but the number one, the Utobeer stall, is only available during the limited Borough Market hours. On contrast, Kris is available even in late, post-meeting hours.

Not all roads lead to Kris, and my route is probably not one you would try out a late evening wearing your most flashy designer gear. Having attended quite a few beer festivals, my observation is that the latter may not pose too much of a problem to many beer enthusiasts.

The route involved taking the Piccadilly line to Caledonian Road, just one (long) stop east of King's Cross St. Pancras, and making the 10 minute walk up North Road to this splendid beer and wine shop in 394 York Way. From the tube station you get a glimpse of the imposing Emirates Stadium- on Saturdays the fashion code is red and white Emirates shirts in this area. The walk continues past 19th century buildings, full of character despite having seen the ravages of time, dreadful post-war estates that have fared much worse, and then there is the odd noughties building with solid fences around.

Finally inside this unimposing off-licence an impressive arsenal of craft beers- both international and British- await you. Among the international guys, the Belgians impress the most, but the British selection is still the main draw to me.

I think I have found my new, regular hotspot in the British capital, besides The Wenlock Arms. Both offer sufficient ammunition for most beer hunters, in my opinion.

Comments:
Never been there either. See you at the festival next week?

the one in gothenburg? very tempted, but not 100% sure yet.

Never heard of this shop before, so made a note of it.

Another pub worth considering, and easier to get to than the Wenlock, is The Edgar Wallace. 8 cask ales, good food, and good service. Nice place, too.

I will check out The Edgar Wallace next time, sounds promising.

Good information indeed motivating to visit this wonderful place and surely next coming month i can think to visit.

India is know as golden bird because of its beauty. There are several beautiful place like hill station,beach,temple,fort and so many things.KERLA is one of them IT is known for natural beauty.
If u want to go kerala in India then must visit on

India has been known for its unique culture and tradition. For a traveler, India always offers a wide variety of experiences at every step. India is filled with attractive travel opportunities from one corner to the other. Replete with spellbinding destinations, India leaves you in awe and wonder.
Incredible India