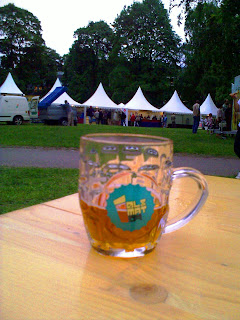 Øl og Mat. Or Beer & Food. Light years away from Rome's Bir & Fud, mind you. In more ways than one, it was not only the cool Oslo summer night that marked a stark contrast to its hotter namesake in Rome. While the latter is maybe my absolute favourite beer bar in the world, with a passion for craft beer that you are unlikely to find (expressed) anywhere else, the former is a new entrant on the Norwegian beer scene, still struggling to find its feet.

Øl og Mat is a virgin beer festival hosted in the biggest park in central Oslo, the Sofienbergsparken, located in the trendy neighbourhood of Grünerløkka- far from as cool as Friedrichshain, but less gentrified than Islington.

No jokes about their ambitions, though- the festival fills up a big chunk of the park (much to the annoyance of local Christian People's Party representatives who do not believe much in joy this side of death). I have to admit that my initial enthusiasm was soon replaced by skepticism when I saw the beer list- how can you promote craft beers in Norway when our two most excellent craft breweries, Nøgne Ø and Haandbryggeriet, are not even there with a small tasting?

Craft or not, the scale was impressive for Oslo, even though there were many empty seats on this windy Wednesday evening (plus there was a big Metallica concert 1 kilometre away competing for attention). Though the volume of the rock band playing inside the biggest tent indicated that they were up to the challenge.

Each country likes to do things their own way when it comes to beer festivals, it seems. In Belgium and the Netherlands tokens ("bonnen") rule; in the UK, cash is king. In connected Norway you refill your festival card yourself at the terminals near the gate. Practical as this may be, there is no hiding the fact that the price level is quite steep for a beer festival- 2,50 euros for the card, 3 euros for the tasting glass and 5 euros each for 20 cl tastings.

Cold numbers aside, warm thanks go to the Danish craft brewer Svaneke which provided an extensive range of beers to the festival, many of which I have not tasted before. Personally I do not think that all their beers rock the world, but showing up in force at this festival proves their commitment to the cause (unlike their Norwegian counterparts, one may argue). Also the Scottish craft beer range was quite extensive, but these beers you can already find at premium super markets in the Norwegian capital.

The atmosphere is undeniably amicable for such a big scene with a good mix of people. Knowledgeable middle-aged craft beer lovers can be spotted, but here and there are even some young beauties brave enough to try a Skull Splitter (some of them possibly craft beer virgins).

Virgins themselves at arranging this kind of festival, I have to say that the festival is better than feared. There is no reason for seasoned Ratebeerians to make their pilgrimage to the Øl & Mat festival in Oslo, but for those of us who live here, it does add some flavour to a city that only has one (or possibly two) beer bars of real class.

It is achieved mostly with a little help from international, rather than national, friends. The bar tenders may be all Swedish (like in the rest of Oslo), but ultimately it is the Danish craft brewer Svaneke and its Anglo-Saxon equivalents that represent the craft in the beer festival. The Norwegian alibi was provided by a specially crafted festival beer from Oslo Mikrobryggery that was quite decent, too. All in all, not too bad a performance for a virgin, I guess.

Comments:
Wow... Excellent dear, great post!! there is so many information on this blog, keep posting like this so that i can come back every day for some new topic...
High fashion Ladies wear Designer
for apparel fairs and for garment exporters
Thanks for sharing...

Great Post!Thanks for sharing this information with us.All beer lovers will like it because it's all about beer.
How To Make Beer

Its good to hear there is a bustling micro-brew scene in Norway, even with the help of some international folk. Ive been hearing good things about the brewing scene over there so Im looking forward to trying some of your beers. Any suggestions on beers I might be able to find this side of the pond?
Cheers,
BB

BlogFront.org is committed to uphold the quality standards of blogging. We strive to maintain and promote only the most credible blogs in their respective fields.

Spam blogs or "splogs" has been a problem for some time now and people are getting confused about which blog to trust.

We would like to thank you for maintaining such a reputable blog. We know that it takes time, effort and commitment to keep such a blog and as such, we have added your blog as one of the top Beer Blogs.

You can see your blog listed here: http://blogfront.org/beer/2

You can also claim your BlogFront Top Blogs badge at http://blogfront.org/badges/beer

Thank you for keeping your blog credible. Let's keep the blog revolution alive!

To find address of charming restaurants in the gites dordogne visit here : http://www.gitesdordogne.nl

Content:
Welcome to Make Money Online with best investment in Hedge fund day trading with high returns on Daily Interest the world best revenue sharing program in which High Yield Investment Program, Best Hyip, Best Investment, Hyip Monitor, Forex Fund, Daily Profit, Monthly Interest, Monthly Profit, Earn Money Online, Money Maker Group, Dream Team Money and like this much more and you can withdraw the amount throw referral commission, eCurrency Invest, LibertyReserve, Alert Pay and SolidTrustPay as well. Get 200% profit within 150 days and the minimum withdraw is only $5 which is on daily basis.
For More Details click the link below:

Check our video about the Beer Tourist that comes to Portland and support craft beer! #busartproject #finalcountdown https://vimeo.com/77457259