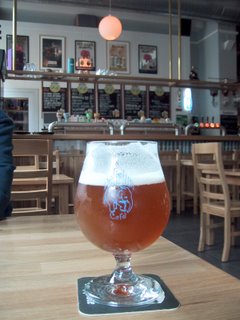 When the more serious trips are still weeks away, and the beer selection at home is shrinking dangerously, there is still hope for a craft beer enthusiast in Oslo. Gothenburg, or Göteborg as the locals call it, is just a four hour bus drive away, ideal for daytrip. Same size population-wise as Oslo, but many times greater beer-wise.

After a solid lunch we recovered from the bus trip and were ready for the natural first destination for any Norwegian going to Sweden, Systembolaget. It is the Swedish state liquor store with prices about half that in Norway (and thus twice those on the continent) and with much greater selection. Inside their outlet in the busy Nordstan shopping centre you hear Norwegian spoken everywhere.

Still it is a monopoly that cares little about great Swedish microbreweries. Only the beers from the Nils Oscar and Jämtlands micros are widely available- if you want anything from, say, the excellent Nynäshamn you have to order in advance at least 20 bottles of each beer. And yet they still find room for the undrinkable Victoria Bitter from down-under.

Luckily, Göteborg has its fair share of high-quality beer bars where you will find what the state liquor store does not care to sell you plus lots of Belgian goodies.

The Bishops Arms is a stylish British pub chain with two outlets in Sweden's second city. Upon entering I noticed a fridge packed with great Belgians. Furthermore, I find it a civilised tradition to offer small samples before making the customer commit to a pint. That said, it still annoys me that they don't bother to present a proper beer list- their whisky list promised much more commitment. The Västra Hamngatan outlet, housed in the basement of the Elite Park Avenue Hotel, only had two Swedish micros on tap. With Sir Winston Churchill staring down from the wall I felt I had no choice but going for Britannia, an English Strong Ale from the local Dugges microbrewery.

Better luck at The Delirium Cafe then, which I have compared it to its sister (or mother) in Brussels before. On draught was among others the Indianviken Pale Ale from Nynäshamn. Peachy golden with a very big creamy, offwhite head that left nice lacing, as you can see from the picture. What you cannot see is the complex apples and peary nose pairing with pine hoppiness. Good sweetness was matched by decent bitterness, the flavours coming out quite fruity with some tartness as well. Landing somewhere between a Belgian strong ale and an IPA, the beer showed off quite a bit of personality. Dugges Wallonia was another treat that was hard to resist at this Belgian beer café.

Refreshed after the Delirium experience, the highlight was still to be the "Haket Bar å Sånt", Bar and Stuff. Located in a working class area alongside the quays in the street of 1. Långgatan it offers a good view to the boats departing for the Scandinavian beer paradise, Denmark. This friendly establishment combines a beer specialist bar with a gay nightclub and a Japanese restaurant, living up to the "and Stuff" bit. Truth is that I may have tasted better sushi, but given the enthusiasm of the female owner and the fact that the bar stocked a good many top-range Swedish micros, including the splendid Nynäshamn Smörpundet Porter, stored one year in oak casks before bottling, this seemed like a minor hitch.

The bar is really close to another legendary Göteborg beer bar, the Rover. Unfortunately, neither opens until 5 pm on Saturdays and thus competing for the last hurrah for a Norwegian daytripper who has to return to the beer desert (and the customs officers guarding it- good thing you do not have to declare what is already inside your body!)

The Goths used to conquer the world, but these days it seems that the world has conquered the Goths. That is a good deal for the world!

Brew Wharf And The Dwarf 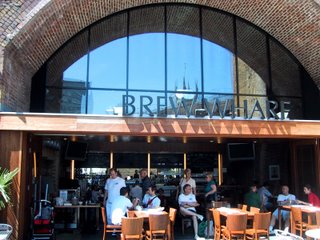 The Borough district of London sees a lot brewing these days. I have on several occasions praised the Utobeer market stall at the splendid Borough Market, with stuff to fill a connoisseur's wettest dreams (craft beers and good wines, I suppose), not to mention his stomach.

The nearby Brew Wharf brewpub is a recent addition to the area's attractions, and it does not disappoint unless you desire your bar brown and nicotine-stained; it is sleek and modern with three big rooms under the railway arches and a patio facing the market. I found their Best a nice surprise with its fruity and malty nose. Very bitter throughout, showing off fruity flavours as well as a very dry finish with a touch of wood. Not unusual for a (best) bitter it had a small head and was rather light-bodied.

Brew Wharf is also one of few places to find a wide range of Meantime brews, either among the 25 bottled beers or from the 7 taps of the brewpub.

That small can be beautiful should be evident for all lovers of craft beer. A couple of weeks ago the smallest bar in the British capital opened its doors, but it could well prove to be one of the best. With supplies and know-how from Utobeer and promising Thomas Hardy Ale on cask The Rake is definitely included on this beer tourist's shortlist for his next trip to London in a month's time. Situated between the Southwark Cathedral and Vinopolis/Brew Wharf in 14, Winchester Walk the bar is open every day except for Mondays and opening early on Saturdays. On Sundays it opens at noon.

With a microbar and a microbrewery Borough is certainly no dwarf in the beer world! 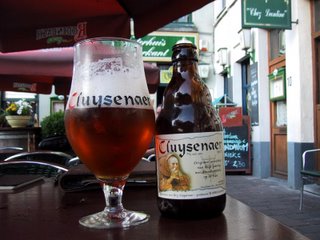 The address is Groentenmarkt (the vegetable market) in Gent, and the venue is Het Waterhuis Aan de Bierkant- the water house at the bier side. Though the river Leie flows closeby, you are neither there for the water nor for vegetables. The ever reassuring sign "Bierhuis" is prominently displayed, as if they had to prove something.

Proef is there, as you might expect. The presence of the Proefbrouwerij, located in nearby Lochristi, is evident at all the better beer bars in Belgium's third city- those bars have often had a huisbier made for them there (or at Van Steenberge or even Huyghe, both breweries situated just outside the city limits.)

The Proefbrouwerij housebeer made for Het Waterhuis Aan de Bierkant is called Gandavum Dry Hopping. Golden-coloured and big-headed it has a spicy aroma with hints of pine and coriander. The sweet maltiness is well-matched by good bitterness as well as spices, and the mouthfeel is dry. A great housebeer, that I rated a high 4 on the Ratebeer. Pictured is another Proef brew, the Cluysenaer, which, appearances aside, is quite similar to the Gandavum.

This similarity is one of the major criticisms of the industrious Proefbrouwerij. With hindsight I have a feeling I might have been a little over-generous with those ratings; a high rating requires a rather original beer (though dry hopping is a relatively new feature in Belgian brewing). No doubt influenced by one of the most picturesque locations for a beery watering hole anywhere plus attentive and knowledgable service on a nice summer evening, even a beer tourist is just human after all. The Proef brews are usually always well-made, though not necessarily Nobel prize candidates for originality.

Het Waterhuis is definititely a place for "bier proevers", though staying objective (the link is provided is for some added subjective nostalgia) can be a challenge.