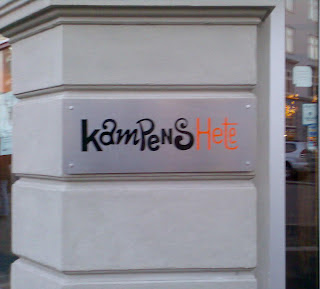 Located in (or rather near, some would say) the working-class suburb of Kampen and a mere stone's throw from the Munch museum there is new, warming place for beer drinkers in the Norwegian capital.

A restaurant and a bar, the name, Kampens Hete, translates into the Heat of the Battle or just the Heat of (the suburb of) Kampen.

The cuisine is continental, but more importantly, the beer list resembles the likes we have seen on better part of the continent, too. Food may be king here, but it is seldom to see such a well-chosen list of 32 beers in this country, including 4 Nøgne Ø's, 2 Atna beers and 9 suberb Belgians. The Norwegian macro beer establishment is represented by Aass, another good choice in my opinion. In terms of selection this place ranks third in the beer desert of Oslo, but when you add beer knowledge and service it may well be a contender for the gold medal.

As you enter, you can either go right to the bohemia-meets-fifties' diner- style restaurant or turn left to the bar area, which includes wireless access for those who need to connect to the real world. The basement is only open for special arrangements, among others a recent beer tasting evening. With all these things going, the establishment takes a deserved rest on Sundays and Mondays.

Kampens Hete is a welcome ally in the battle for good beer in Oslo.

A Recipe for Delirium 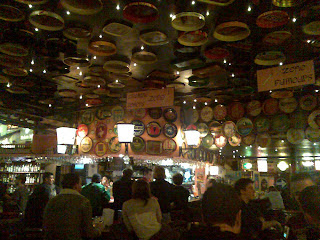 Some like it straight. Enthusiasts of malt-derived drinks are perhaps among the more serious purists, whether belonging to the craft beer camp or being malt whisky drinkers.

Incidentally, the two groups seem to go hand in hand, particularly in Sweden. Most of the great beer bars in our neighbour country, the Delirium Café in Göteborg being no exception, offer a wide variety for connoisseurs of the golden "water of life". Indeed, the annual festival hosted by EBCU member Svenska Ölfrämjandet in Stockholm is a whisky festival, too, and the world's premier beer expert has proven that his nose is not limited to beer, if anyone ever thought so.

Also the Delirium Café in Brussels, a place that mysteriously manages to appeal to both lager/fruit beer drinking students and serious, note-taking Ratebeerians, offer something for those with a taste for stronger stuff. Purists beware, though, this includes beer cocktails, which you will find described on their web site.

Personally, I quite liked their "La Merveilleuse De Rochefort"- a healthy portion of white port topped by a bottle of Rochefort 10, all served in a traditional Rochefort glass. The chocolate and pear sirup character of the trappist heavy-weight married perfectly with the sweet port, proving that deviating from the straightforward can bring some wonderful experiences. It may be a recipe for delirium, but it remains one of the secrets behind the great Belgian beer culture.